MSE Seminar: “Topology and Quantum Matter: From Axions to Spintronics”

The confluence of fundamental symmetries and spin-orbit coupling is known to produce emergent electronic states in crystalline solids that are accurately described using the language of topology. This talk provides an overview of this relatively young field of research, showing how the synthesis and study of topological quantum matter yields a playground for both exotic pursuits at millikelvin temperatures (such as the realization of axion electrodynamics in condensed matter [3]) and pragmatic technologies that work under ambient conditions (such as spintronic devices). 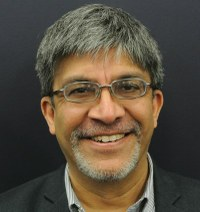 Dr. Samarth is Downsbrough Department Head and Professor of Physics at Penn State University. He obtained an undergraduate degree in physics from IIT Bombay and a Ph.D. in physics from Purdue University. He joined the physics faculty at Penn State in 1992 after post-doctoral work at the University of Notre Dame. He is a Fellow of the American Physical Society, Fellow of the American Association for the Advancement of Science, and a recipient of Penn State’s Faculty Scholar Medal in the Physical Sciences and Penn State’s George Atherton Excellence in Teaching Award. He also received an Outstanding Physics Alumnus Award from Purdue University and an Outstanding Alumnus Award from IIT Bombay. He currently serves on the elected chair-line of the Division of Materials Physics of the American Physical Society. Dr. Samarth has pioneered the epitaxial synthesis of a variety of spin-based quantum materials, resulting in fundamental advances in our understanding of spintronics and magnetism.