The Harold Pender Award, initiated in 1972, is given by the Faculty of the Moore School to an outstanding member of the engineering profession who has achieved distinction by significant contributions to society. The Pender Award is the School’s highest honor and is celebrated with a guest lecture by the honoree and a reception. 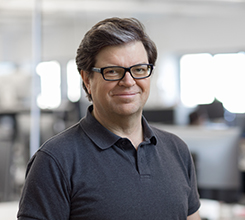 Penn Engineering is proud to announce the 2018 recipient of the Harold Pender Award: Yann LeCun, Vice President and Chief AI Scientist, Facebook and Silver Professor, at the Courant Institute and the Center for Data Science.

Lecture Details
The Pender Award will be presented following a lecture entitled “Could Machines Be More Like Humans?” given by Dr. LeCun on September 19, 2018.  The event will be held at 4:00 p.m. in the Glandt Forum at the Singh Center for Nanotechnology.

Dr. LeCun received an Electrical Engineer Diploma from ESIEE, Paris (1983), and a Ph.D. in CS from Université P&M Curie (1987). After a postdoc at the University of Toronto, he joined AT&T Bell Laboratories (Holmdel, NJ) in 1988, later becoming the head of the Image Processing Research Department at AT&T Labs-Research in 1996. He joined NYU as a professor in 2003, following a brief period at the NEC Research Institute (Princeton). In 2012. He became the founding director of the NYU Center for Data Science. In late 2013, he was named Director of AI Research at Facebook, remaining on the NYU faculty part-time. He held a visiting professor chair at Collège de France in 2015-2016.

Dr. LeCun’s current interests include AI, machine learning, computer perception, robotics, and computational neuroscience.  He is best known for his contributions to deep learning and neural networks, particularly the convolutional network model which is very widely used in computer vision and speech recognition applications.  He has published over 190 papers on these topics as well as on handwriting recognition, image compression, and dedicated hardware for AI.

LeCun is founder and general co-chair of ICLR and has served on several editorial boards and conference organizing committees. He is co-chair of the program Learning in Machines and Brains of the Canadian Institute for Advanced Research. He is on the  boards of IPAM and ICERM. He has advised many companies and co-founded startups Elements Inc. and Museami. He is in the New Jersey Inventor Hall of Fame. He is a member of the US National Academy of Engineering, the recipient of the 2014 IEEE Neural Network Pioneer Award, the 2015 IEEE PAMI Distinguished Researcher Award, the 2016 Lovie Lifetime Achievement Award, and a Honorary Doctorate from IPN, Mexico.

2010: Robert E. Kahn and Vinton G. Cerf – for their pioneering and seminal contributions to network-based information technology, and especially for the design and implementation of the TCP/IP protocol suite, which continues to provide the foundation for the growing Internet.

2006: Mildred Dresselhaus – for pioneering contributions and leadership in the field of carbon-based nanostructures and nanotechnology, and for promoting opportunities for women in science and engineering.

2003: Dennis Ritchie and Ken Thompson – for development of the UNIX operating system and C programming language.

2002: John J. Hopfield – for his pioneering accomplishments in the field of Computational Neuroscience and Neuroengineering.

2000: Jack St. Clair Kilby – for his contribution to the invention of the integrated circuit, or microchip.

1999: John H. Holland – Founder of genetic algorithms and innovative research in the science of complexity and adaptation.

1995: B. George Dantzig, – Developer of the simplex algorithm spawning the field of linear programming.

1993: Hiroshi Inose – Leader in advances in digital communication and in increasing our understanding of the effects of information flow on society.

1991: Arno Penzias – Discoverer of the background microwave blackbody radiation of the universe.

1990: Dana S. Scott – Pioneer in application of concepts from logic and algebra to the development of mathematical semantics of programming languages.

1988: John Bardeen – Co-inventor of the transistor and contributor to the theory of superconductivity.

1987: Herbert A. Simon – Contributor to cross-disciplinary work between computer science, psychology, economics, and management, including the development of artificial intelligence and cognitive science.

1972: Edward E. David, Jr. – Science Advisor to the President of the United States.

Harold Pender (1879-1959) was the first Dean of the University of Pennsylvania’s Moore School of Electrical Engineering, a position he held from the founding of the School in 1923 until his retirement in 1949.

He authored five technical books in the areas of electromagnetic field and circuit theory and in electrical machinery. His various editions of Pender’s Handbook of Electrical Engineers were known to practically all electrical engineers over several generations.

In 1924, at the start of the radio age, Dr. Pender co-founded the International Resistance Company (IRC) and in 1932 developed and patented the composition resistor.

Dean Pender encouraged faculty research directed toward the solution of significant engineering problems. Under his direction, the Moore School constructed a differential analyzer for use in solving problems in power and ballistics. This led to the development of ENIAC, the world’s first large-scale all electronic, general purpose, digital computer which was completed at the Moore School in 1946. The proof that such a machine could be built founded a new industry and marked the beginning of the Computer Revolution.

We remember Harold Pender today for his personal engineering achievements and the role he played in establishing and directing the Moore School, and we honor his memory by representing the Harold Pender Award: “to an outstanding member of the engineering profession who has achieved distinction by significant contributions to society.”