Recognizing an increasingly significant inter-relationship between the rapid growth of new technologies and the business and governmental sectors, this lecture series brings distinguished individuals to Penn Engineering to interact with students and faculty on broad issues affecting technology and science, research and policy. 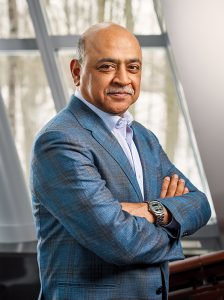 “The Future of Business Tech: Accelerating Discovery and Innovation With Hybrid Cloud, AI and Quantum Computing”

You can view the recording of this event with this link: Zoom link

Arvind Krishna is the Chairman and CEO of IBM. As a business leader and technologist, he has led the building and expansion of new markets for IBM in artificial intelligence, cloud, quantum computing and blockchain. He has also played a significant role in the development of innovative IBM products and solutions based on these technologies.

Over his 30-year career at IBM, Arvind led a series of bold transformations and delivered proven business results. He most recently drove the successful $34 billion acquisition of Red Hat – the largest software acquisition – that has defined the hybrid cloud market. Together, IBM and Red Hat give clients the unique ability to build mission-critical applications once and run them anywhere.

Arvind previously was SVP of Cloud and Cognitive Software, where he pioneered the company’s hybrid cloud business. He also headed IBM Research, where he drove innovation in core and emerging technologies.

Arvind has an undergraduate degree from the Indian Institute of Technology, Kanpur (IITK) and a Ph.D. from the University of Illinois at Urbana-Champaign. He is the recipient of distinguished alumni awards from both institutions.

Past Speakers in the Series

April 24, 2001: Irwin Mark Jacobs, Chairman and CEO, Qualcomm – “Wireless Access to the Internet, the Technology and the Business”

October 13, 1999: George Heilmeier, Chairman Emeritus and former Chairman and CEP Telcordia Technologies – “From Pots to Pans.com – Information Systems and Technology for the Next Decade and Beyond”

February 24, 1999: David J. Farber, the Alfred Fitler Moore Professor of Telecommunication Systems – “The University in the Information Age: A Technologist’s Look at the Future Directions in Computing and Communications and its Impact on the University”