Abstract
The last decade has seen a remarkable shift in usage and value of semiconductor memory technologies. These changes are driven by the elevation of four particular target applications –(1) mobile multi-media applications, (2) explosive growth in the sheer volume of data that is being created and stored, (3) emphasis from the individual components to the configurability in high-volume subsystems and (4) applications in brain inspired artificial intelligence systems.

The dominating memory technologies in the industry have been SRAM, DRAM (volatile) and NAND flash (non-volatile). Storage class memory (SCM) describes a device category that combines the benefits of solid-state memory with the archival capabilities and low cost per bit of conventional hard disk magnetic storage. In the past decade, significant focus has been put on the emerging memory technologies that include: MRAM (Magnetic RAM), STTRAM (Spin-Transfer Torque RAM), FeRAM (Ferroelectric RAM), PCRAM (Phase Change RAM), RRAM (Resistive RAM) and Memristor.

The invention of ferroelectricity in doped hafnium based oxides (HfZrO2, doped HfO2) has attracted tremendous interest in realizing HfO 2  based devices.  They have large remnant polarization of up to 45 μC cm −2 , and their coercive field (≈1–2 MV cm −1 ) is larger than conventional ferroelectric films by approximately one order of magnitude. Furthermore, they can be extremely thin (<10 nm) and have a large bandgap (>5 eV).  The primary devices aimed in these applications are ferroelectric field effect transistors (FeFETs) and ferroelectric tunnel junctions (FTJs).  In FeFETs, the conventional logic gate dielectric is replaced with a ferroelectric material that remembers the electric field to which it had been exposed resulting in the threshold voltage of two stable binary states similar to the way it is done in a flash memory cell.

We are aiming at developing a fabrication platform that will allow fabrication of n and p channel FeFETs and FTJ based circuits using standard CMOS process on 150 mm wafers in a university environment.  We observe FeFETs exhibiting charge trapping and polarization induced memory window. The process developed for fabricating 1T1R FTJ array integrated with NMOS will be described. FTJs are promising candidates for synaptic weight elements in neural network hardware because of their nonvolatile multilevel memory effect. The talk will provide an overview of advances made in various memory technologies with their future trends. 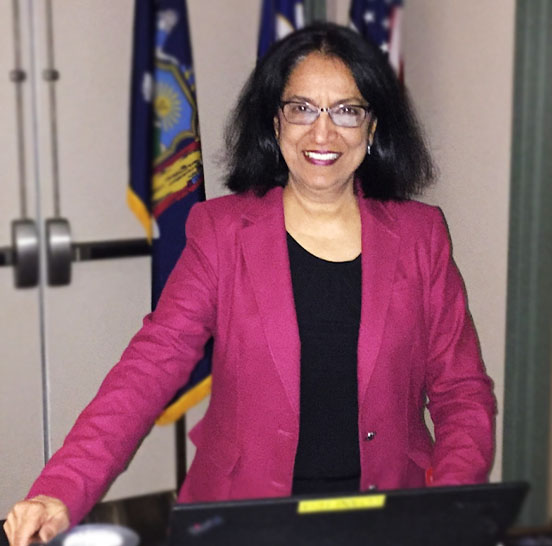 Professor of the Department of Electrical and Microelectronic Engineering, Kate Gleason College of Engineering RIT

Santosh Kurinec is a Professor of Electrical & Microelectronic Engineering at Rochester Institute of Technology (RIT). She is a Fellow of IEEE, a Member of the New York Academy of Sciences, and an IEEE Electron Device Society Distinguished Lecturer. She earned Ph.D. in Physics from University of Delhi, India, and served as a Scientist at the National Physical Laboratory, New Delhi. She worked as a postdoc at University of Florida. Prior to joining RIT, Dr. Kurinec was Assistant Professor of Electrical Engineering at Florida State University, Tallahassee, FL.

She is a recipient of the 2012 IEEE Technical Field Award. The Rochester Engineering Society honored Dr. Kurinec as the Engineer with Distinction in 2013. In 2016, she received the Medal of Honor from the International Association of Advanced Materials (IAAM).  She was inducted into the Women in Technology International Hall of Fame in 2018.