The massive quantities of single-use plastics discarded each year requires new sustainable end-of-life solutions. Current technologies, such as melt-processing for recycling or incineration for partial energy recovery, are insufficient to deal with the crisis in its entirety. New methods involving chemical upcycling, by catalytic conversion of the used materials into higher value products, could provide molecules that make use of components of the existing catenated carbon starting materials. In addition, few existing catalytic methods can break carbon-carbon bonds in aliphatic hydrocarbons lacking directing groups and introduce new heteroatom functionality. In collaborative work, we have constructed and studied the first example of a hydrogenolysis catalyst that makes use of its 3D architecture to transform polyolefins into narrow distributions of shorter linear hydrocarbon chains. A second approach considers approaches to break carbon-carbon bonds in polyolefins and concurrently introduce reactive sites that could enable the use of products as chemical synthons. Early transition metal complexes are capable of breaking carbon-carbon bonds via β-alkyl elimination to form shorter carbon chains in oligomerylmetal species. Transmetalation to a main group element could afford reactive species to access fatty alcohols and fatty acids by oxidation or carboxylation, for example. We have developed examples of such transformations, based on organozirconium single-site catalysts and hydride-generating organoaluminum reagents. 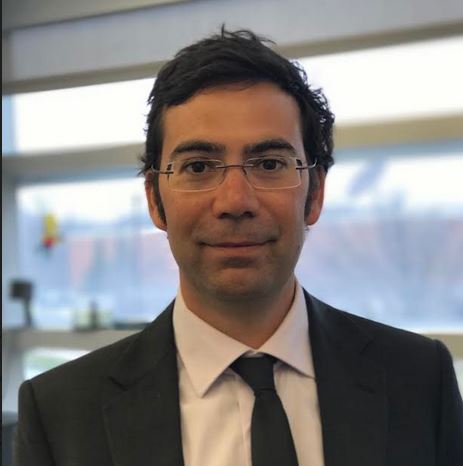 Aaron D. Sadow is a Professor in the Department of Chemistry at Iowa State University.  He serves as Energy Frontier Research Center Director of the Institute for Cooperative Upcycling of Plastics (iCOUP), a Basic Energy Sciences (BES) program funded by the Department of Energy, and is the lead Principal Investigator in the Catalysis Research Program at Ames Laboratory. Sadow earned a B.S. from Penn State in 1997 working with Ayusman Sen on polyester synthesis and a Ph.D. in Chemistry from the University of California, Berkeley in 2003, where he worked with T. Don Tilley developing new catalytic organometallic methods for organosilane polymerization and methane utilization. He worked as a postdoc at the Swiss Federal Institute of Technology (ETH Zürich) with Antonio Togni on asymmetric phosphination before initiating his independent career as a scientist at Iowa State and Ames Laboratory in 2005. His expertise includes homogeneous, and surface organometallic chemistry, polymer chemistry, asymmetric catalysis, and rare earth chemistry.