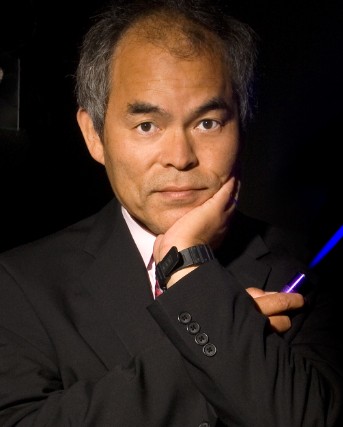 Shuji Nakamura received a Ph.D. in Electrical Engineering from the University of Tokushima, Japan and worked at Nichia Chemical Industries from 1979 to 2000, after which he became a professor at UCSB. During his time at Nichia, he independently researched and ultimately demonstrated group-III nitride materials as possible blue light emitters.

Instrumental to his success was the development of a novel two-flow MOCVD, in 1990. This tool permitted him to obtain and explain p-type GaN while demonstrating the first high-quality InGaN layers, in 1992. This material was integrated into novel device structures, providing the bright violet, blue, or green LEDs and lasers that are known today. High-efficiency white light sources using these blue LEDs became available in 1996 and have since become the most efficient white light source known to man, changing the world forever. This achievement led him to be awarded the Nobel Prize in Physics in 2014.

Dr. Nakamura has received numerous awards for his work, including the Nishina Memorial Award (1996), the Materials Research Society Medal Award (1997), the Institute of Electrical and Electronics Engineers Jack A. Morton Award, the British Rank Prize (1998), the Benjamin Franklin Medal Award (2002), the Millennium Technology Prize (2006), the Czochralski Award (2007), the Prince of Asturias Award for Technical Scientific Research (2008), The Harvey Award (2009), and the Technology & Engineering Emmy Award (2012) awarded by The National Academy of Television Arts & Sciences (NATAS). He was elected a fellow of the U.S. National Academy of Engineering in 2003. He is the 2014 Nobel Laureate in Physics for the invention of efficient blue light-emitting diodes which has enabled bright and energy-saving white light sources. Dr. Nakamura received the 2014 Order of Culture Award in Japan. In 2015, he was inducted into the National Inventors Hall of Fame and received the 2015 Charles Stark Draper Prize for Engineering and the 2015 Global Energy Prize in Russia. He is also the recipient of The Mountbatten Medal Achievement Award in England (2017) and the 2018 Zayed Future Energy Prize Lifetime Achievement in the United Arab Emirates.

Since 2000, Dr. Nakamura has been a professor of Materials and Electrical and Computer Engineering at the University of California, Santa Barbara. He holds more than 200 U.S. patents and over 300 Japanese patents. He has published over 550 papers in his field. Dr. Nakamura is the Research Director of the Solid State Lighting and Energy Electronics Center and The Cree Chair in Solid State Lighting and Displays. In 2008, he co-founded Soraa, Inc., which operates vertically integrated fabrication facilities in California’s Silicon Valley and Santa Barbara.