MSE Seminar: “Role of Solvation and Dynamics on Ion Transport in Polymer Electrolytes”

Polymer electrolytes are an important class of ion conducting materials critical to enabling various electrochemical systems. Fundamentally, ion-polymer coordination, inter-connectivity of solvation sites, and corresponding ion-solvating polymer dynamics are critical in understanding the limits of ionic conductivity. Here, the importance of these effects is highlighted in a series of combined experimental and computational studies on model lithium-ion conducting polymer electrolytes. First, we focus on graft polymer architectures of poly[(oligo ethylene oxide) methyl ether methacrylate] (POEM) varying oligo side-chain lengths. With addition of lithium bis(trifluoromethanesulfonyl)imide (LiTFSI), the observed differences in ionic conductivity between the POEM derivatives and linear poly(ethylene oxide) (PEO) cannot be adequately explained by differences in Tg. Instead, graft architecture of POEM leads to nonuniform, position-dependent relaxation and ion solvation behaviors along the side chain. Importantly, the limits of ionic conductivity are dictated by the segmental mobility of the ethylene oxide units that form effective solvation sites, rather than system-wide dynamics. Lastly, the talk will end with results from ongoing work focusing on solvation site formation and ion transport mechanisms in mixed polarity copolymers based on POEM and poly(glycerol carbonate methacrylate) (PGCMA). 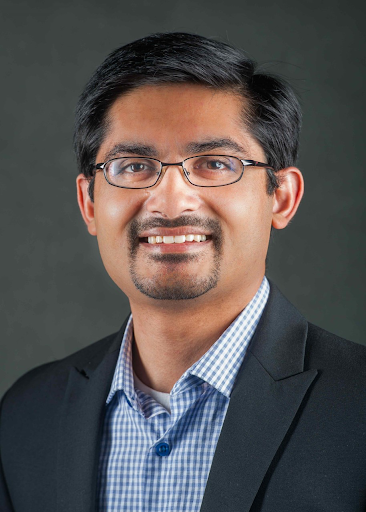 Shrayesh Patel is an assistant professor in the Pritzker School of Molecular Engineering at the University of Chicago and holds a joint appointment in the Chemical Sciences and Engineering Division at Argonne. He is also a member of Joint Center for Energy Storage Research (JCESR). Shrayesh completed his undergraduate degree at the Georgia Institute of Technology in Chemical and Biomolecular Engineering in 2007, then received his PhD in chemical engineering from the University of California, Berkeley in 2013. Before joining the PME as an assistant professor, he was a postdoctoral research associate in the Materials Research Laboratory at the University of California, Santa Barbara. His research interests focus on polymers for sustainable energy systems. He is specifically interested in the fundamental understanding and the applications of charge transporting polymers (ions and/or electrons) on energy storage and conversion devices such as lithium-ion and beyond lithium-ion batteries, redox flow batteries, and thermoelectrics. Overall, his research expertise lies at the interface of polymer science and engineering, electrochemistry, and organic electronics.