The gravity-driven flow of grains from a hole in a hopper is an iconic granular phenomenon. It’s different from a fluid in that the rate is independent of fill height, and more spectacularly so in that it can suddenly and unexpectedly clog. How does the susceptibility to clogging decrease with increasing hole size, and is there a well-defined clogging transition above which the system never clogs? This problem is distinct from jamming due to the presence of boundaries and gradients. We show how the fraction F of flow configurations that cause a clog may be deduced from the average mass discharged between clogs. We construct a simple model to account for the observation that F decays exponentially in hole width to the power of dimensionality. Thus the clogging transition is not sharp but rather is defined by observation limits, similar to the glass transition. When the system is immersed in water, F barely changes. Therefore, grain momenta play only a secondary role in destabilizing weak incipient arches and the crucial microscopic variables are likely the grain positions. Work is now in progress to distinguish free-flowing versus clog-causing position microstates using machine learning. Altogether, this gives an entirely new way to think about clogging, beyond the usual approach of investigating the zoology of possible arches and their mechanical stability. 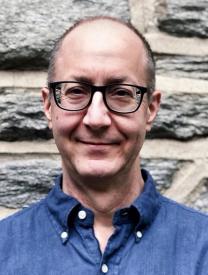 Douglas J. Durian is the Mary Amanda Wood Professor of physics at the University of Pennsylvania. He is a fellow of the AAAS and APS, co-leader of the Penn MRSEC Interdisciplinary Research Group on Softness and Rearrangements in Disordered Solids, and co-founder and associate director of the new Penn Center for Soft and Living Matter. Most of his research is experimental, and centers on how the macroscopic mechanical properties of particulate systems, composed of bubbles or grains or colloids, emerge from collective particle-scale behavior and grain-fluid interaction effects. Durian earned his PhD at Cornell University, and was on the faculty at UCLA for thirteen years before moving to Penn.