Physical human-robot interaction (pHRI) aims at taking advantage of the complementary capabilities of robots and humans. One of the key challenges in pHRI is to provide a high-bandwidth human-robot interaction that is safe and intuitive for the human user. To this end, it is proposed in this work to revisit the design of robots in order to provide a low-impedance mechanical interaction. The concept of macro-mini robotic system is used and applied to interactive robotic devices. Also, the design of backdrivable redundant parallel robots is considered. In this concept, parallel robots are used to provide backdrivability while kinematic redundancy is introduced to increase the rotational workspace of parallel mechanisms, by alleviating the singularities. Solutions based on passive or active human-robot interfaces are proposed and examples of implementations are described. Prototypes of robotic systems developed at Université Laval based on the above concepts are demonstrated. 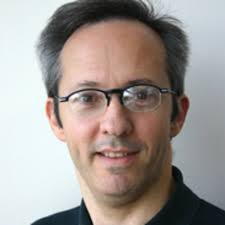 Clément Gosselin received the B. Eng. degree in Mechanical Engineering from the Université de Sherbrooke, Québec, Canada, in 1985, and the Ph.D. degree from McGill University, Montréal, Québec, Canada in 1988. He was then a post-doctoral fellow at INRIA in Sophia-Antipolis, France in 1988–89. In 1989 he was appointed by the Department of Mechanical Engineering at Université Laval, Québec where he is a Full Professor since 1997. He is currently holding the Canada Research Chair in Robotics and Mechatronics since 2001. He was a visiting researcher at the RWTH in Aachen, Germany in 1995, at the University of Victoria, Canada in 1996 and at the IRCCyN in Nantes, France in 1999.

His research interests are kinematics, dynamics and control of robotic mechanical systems with a particular emphasis on the mechanics of grasping, the kinematics and dynamics of parallel manipulators and the development of human-friendly robots. His work in the aforementioned areas has been the subject of numerous publications in international journals and conferences as well as of several patents and two books. He has been directing many research initiatives, including collaborations with several Canadian and foreign high- technology companies and he has trained more than 120 graduate students. He is an Associate Editor of the IEEE International Conference on Robotics and Automation (ICRA) and of the ASME Journal of Mechanisms and Robotics.

Dr. Gosselin received several awards including the ASME DED Mechanisms and Robotics Committee Award in 2008 and the ASME Machine Design Award in 2013. He was appointed Officer of the Order of Canada in 2010 for contributions to research in parallel mechanisms and underactuated systems. He is a fellow of the ASME, of the IEEE and of the Royal Society of Canada.