Curved shells, when confined, can deform to a broad assortment of large scale shapes and smaller scale wrinkling and folding patterns quite unlike what produced by their flat counterparts. The intrinsic, natural curvature of shells is the central element that allows for this rich and very interesting morphological landscape, but it is also the source of geometric nonlinearities that renders an analytic treatment of non‐Euclidean shells, even under small load, very difficult. In this talk we examine some snapshots of this morphological landscape. Inspired by the natural folding and unfolding of polled grains, we use theory, simulations and experiments to explore the large scale deformation of a confined thin spherical shell with an opening. We then proceed to investigate the surface topography of shallow doubly curved shells resting on a fluid substrate. The frustration due to the competing geometry of the flat substrate and the curved shell produces a wealth of highly reproducible and ordered, or random and disordered patterns. From these examples, we see Gaussian curvature emerging as a powerful tool that can generate complex patterns. 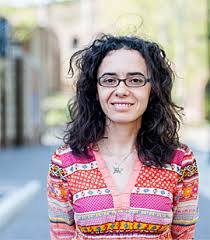 Assistant Professor, Department of Physics and Astronomy, University of Pennsylvania

Eleni Katifori obtained her Ph.D. degree in Physics from Harvard University, and proceeded to a fellowship at the Center for Studies in Physics and Biology at Rockefeller University in New York. In 2012 she started a position as an independent group leader at the Max Planck Institute for Dynamics and Self‐Organization in Goetingen. In 2015 she returned to the US to join the faculty at the University of Pennsylvania as an Assistant Professor. Eleni Katifori is a recipient of a Burroughs Wellcome Career Award at the Scientific Interface, an NSF Career Award and she is a Simons Investigator in Mathematical Modelling of Living Systems. Her research interests are primarily theoretical, and span broad areas from soft matter physics with a focus on biologically inspired physics, thin shell elasticity and biological transport networks.