Polarization is an essential behavior of living cells, yet the dynamics of this symmetry-breaking process are not fully understood. We have developed a spatial stochastic model of cellular polarization during mating of Saccharomyces cerevisiae. Specifically we investigated the ability of yeast cells to sense a spatial gradient of mating pheromone and respond by forming a projection in the direction of the mating partner. Our results demonstrate that a spatial stochastic model of polarisome formation can more robustly reproduce two fundamental characteristics observed in wild-type cells: a tightly polarized phenotype and the ability to track moving pheromone input, in comparison with the corresponding deterministic model.

Existing models of cell polarization have focused solely on the biochemical signaling system. However, there exists a well-known interplay between the growth of the mating projection and the mechanical forces of the cell wall in determining the shape of the cell. The cell wall of S. cerevisiae both defines its shape and provides the mechanical integrity necessary to sustain the large internal turgor pressure. Under the isotropic push of turgor pressure, polarized expansion occurs via localized assembly of new cell wall material in combination with a simultaneous softening of the cell wall, inducing it to yield and locally expand. Intracellular signaling directs enzymes with the ability to modify cross-linking of polymers in the cell wall to the region of polarization. The resulting mechanical feedback from the wall expansion initiates the delivery of raw material via vesicular transport.

To accurately model this complex biological phenomena, we have developed a multiscale computational framework for simulating the coupling of the stochastic dynamics of biochemical reactions involved in shaping walled cells to the mechanical processes of cell wall expansion and growth. Our computational method exploits the time-scale separation between the relatively slow dynamics of the cell wall and the rapid interactions of the intercellular signaling network. 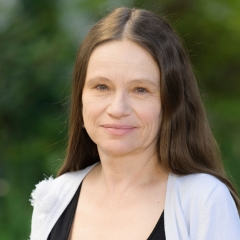 Dr. Linda Petzold is currently Distinguished Professor in the Department of Mechanical Engineering and the Department of Computer Science (Chair 2003-2007), and Director of the Computational Science and Engineering Graduate Emphasis at the University of California Santa Barbara. She is a member of the US National Academy of Engineering and a Fellow of ACM, ASME, SIAM and AAAS. She was named the UCSB Faculty Research Lecturer for 2011, was awarded the SIAM/ACM Prize for Computational Science and Engineering in 2013, received an Honorary Doctorate from Uppsala University in 2015, was awarded the SIAM Prize for Distinguished Service in 2016, and was awarded the IEEE Sydney Fernbach Prize in 2018. Her current research focuses on modeling, simulation and data analytics of multiscale systems in biology and medicine.