Active colloids in nematic liquid crystals are exciting vehicles for materials manipulation. Colloid shape, surface chemistry and dynamic displacement can be designed to introduce defects whose non-linear dynamics generate new modalities of motion and interaction. These effects rely on energy conversion mechanisms, in which active colloids with tailored surface functionalization and shape seed defects and distortions in the nematic liquid crystal domain. Once the colloid moves, e.g., under the action of an external field, these defects undergo complex, non-linear rearrangements with implications for colloid motion. Interactions emerge that differ strikingly in range and form from their static counterparts. I describe our current state of understanding of these systems, their application and our vision for future work in the domain. These interactions provide a rich toolkit for hybrid top-down, bottom-up assembly schemes in which microrobots based on active nematic colloids exploit these far-from-equilibrium topological structures as tools for micro-robotic tasks including building and reconfiguring structures. 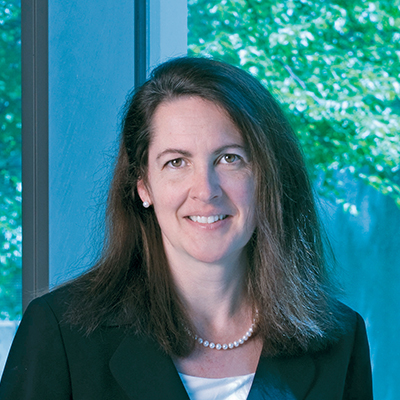 Kathleen J. Stebe received a B.A. in Economics from the City College of New York, Magna cum Laude, and a Ph.D. in Chemical Engineering at the Levich Institute, also at CCNY, under the guidance of Charles Maldarelli. Thereafter, she spent a post-doctoral year in Compiegne, France working with Dominique Barthès Biesel. Professor Stebe joined the Department of Chemical Engineering at Johns Hopkins University, where she rose through the ranks to become Professor and to serve as the department chair. In 2008, Professor Stebe joined the faculty at the University of Pennsylvania as the Richer and Elizabeth M. Goodwin Professor of Engineering and Applied Science. From 2008-2012, Professor Stebe served as the department chair of Chemical and Biomolecular Engineering. In July 2012, she assumed the post of Deputy Dean for Research in the School of Engineering and Applied Science.

Professor Stebe has been a Fellow at the Radcliffe Institute for Advanced Studies; she has received the Robert S. Pond Excellence in Teaching Award at JHU, the Frenkiel Award from the Division of Fluid Dynamics of the American Physical Society, and was named a Fellow of the APS. Professor Stebe’s research focuses on directed assembly in soft matter. Foci include particles interacting by capillarity at interfaces, and particle assembly in complex fluids, including liquid crystals and lipid bilayers. She is an expert in interfacial flows, with particular emphasis on surfactants and Marangoni effects. Other aspects of her research address dynamic surface tension, rheology of protein laden interfaces, and the design of interfaces and bounding surfaces for biological and materials applications.

Professor Stebe is interested in complex fluid interfaces far from equilibrium from a fundamental and engineering viewpoint. In one aspect of her work, she studies the fluid mechanics of surfactant-laden interfaces, dynamic surface tension, wetting phenomena, Marangoni effects and surfactant-driven anomalous drop break up modes. She is also deeply interested in complex structures which form on fluid interfaces, including protein monolayers and bacterial biofilms. Recently, she has become interested in particle-laden fluid interfaces and how interactions that arise at interfaces can be used to steer particles into well-defined structures. Finally, a major effort in her research group focuses on developing strategies for soft reconfigurable systems by molding director fields and topological defects in confined liquid crystals. Throughout, the Stebe group uses fundamental arguments to develop strategies to direct system behaviors ranging from tip-streaming of droplets from surfactant laden drops to steering particles to well defined locations using capillary energies or liquid crystalline director fields.