This dissertation discusses my work in building an HRI platform called Quori and my once separate now integrated work on a manipulation method that can enable robots like Quori, or any more capable robot, to move large circular cylindrical objects.

Quori is a novel, affordable, socially interactive humanoid robot platform for facilitating noncontact human-robot interaction (HRI) research. The design of the system is motivated by feedback sampled from the HRI research community. The overall design maintains a balance of affordability and functionality. Ten Quori platforms have been awarded to a diverse group of researchers from across the United States to facilitate HRI research to build a community database from a common platform.

This dissertation concludes with a demonstration of Quori transporting a large cylinder for which Quori does not have the power to lift nor the range of motion to dexterously manipulate. Quori is able to achieve this otherwise insurmountable tasks through a novel robotic manipulation technique called robotic edge-rolling. Edge-rolling refers to transporting a cylindrical object by rolling on its circular edge, as human workers maneuver a gas cylinder on the ground for example. This robotic edge-rolling is achieved by controlling the object to roll on the bottom edge in contact with the ground, and to slide on the surface of the robot’s end-effector. It can thus be regarded as a form of robotic dexterous, in-hand manipulation with nonprehensile grasps. This work mainly addresses the problem of grasp planning for edge-rolling by studying how to design appropriately shaped end-effectors with zero internal mobility and how to find feasible grasps for stably rolling the object with the simple end-effectors. 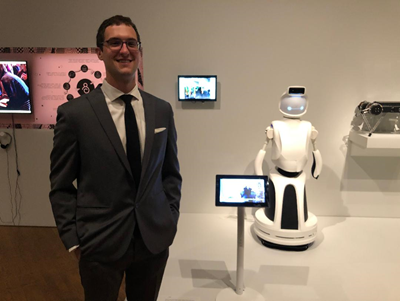