Today’s robots are very brittle in their intelligence. This follows from a legacy of industrial robotics where robots pick and place known parts repetitively. For humanoid robots to function as servants in the home and in hospitals they will need to demonstrate higher intelligence, and must be able to function in ways that go beyond the stiff prescribed programming of their industrial counterparts. A new approach to service robotics is discussed here. The affordances of common objects such as chairs, cups, etc., are defined in advance. When a new object is encountered, it is scanned and a virtual version is put into a simulation wherein the robot “imagines’’ how the object can be used. In this way, robots can reason about objects that they have not encountered before, and for which they have no training using. Videos of physical demonstrations will illustrate this paradigm, which the presenter has developed with his students Hongtao Wu, Meng Xin, Sipu Ruan, and others. 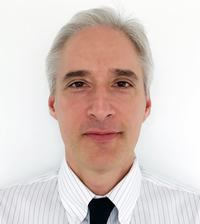 Gregory S. Chirikjian received undergraduate degrees from Johns Hopkins University in 1988, and a Ph.D. degree from the California Institute of Technology, Pasadena, in 1992. From 1992 until 2021, he served on the faculty of the Department of Mechanical Engineering at Johns Hopkins University, attaining the rank of full professor in 2001. Additionally, from 2004-2007, he served as department chair. Starting in January 2019, he moved the National University of Singapore, where he is serving as Head of the Mechanical Engineering Department, where he has hired 14 new professors so far. Chirikjian’s research interests include robotics, applications of group theory in a variety of engineering disciplines, applied mathematics, and the mechanics of biological macromolecules. He is a 1993 National Science Foundation Young Investigator, a 1994 Presidential Faculty Fellow, and a 1996 recipient of the ASME Pi Tau Sigma Gold Medal. In 2008, Chirikjian became a fellow of the ASME, and in 2010, he became a fellow of the IEEE. From 2014-15, he served as a program director for the US National Robotics Initiative, which included responsibilities in the Robust Intelligence cluster in the Information and Intelligent Systems Division of CISE at NSF. Chirikjian is the author of more than 250 journal and conference papers and the primary author of three books, including Engineering Applications of Noncommutative Harmonic Analysis (2001) and Stochastic Models, Information Theory, and Lie Groups, Vols. 1+2. (2009, 2011). In 2016, an expanded edition of his 2001 book was published as a Dover book under a new title, Harmonic Analysis for Engineers and Applied Scientists.