Implantable and wearable medical devices are increasingly being developed as alternative therapies for intractable diseases. In particular, undertreated neurological disorders such as epilepsy, migraine, and Alzheimer’s disease are of major public health concern around the world, driving the need to explore such new approaches. Despite significant advances in neural interface systems, the small number of recording channels in existing technology remains a barrier to their therapeutic potential. This is mainly due to the fact that simultaneous recording from a large number of electrodes imposes stringent energy and area constraints on the integrated circuits that interface with these electrodes. In this talk, I will first discuss an efficient compressive sensing framework for multichannel cortical implants. Next, I will present the design of our sub-microwatt per channel closed-loop seizure control device and both its in-vivo and offline performance. I will then discuss our latest work on the integration of machine learning algorithms for on-chip classification of neural data. Finally, I will give examples of how these results may be used towards designing new devices, to enhance the lives of millions of people suffering from disabling neurological conditions in future. 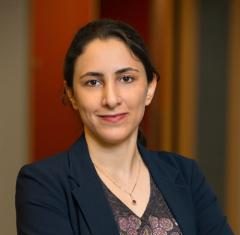 Mahsa Shoaran is currently an Assistant Professor in the School of Electrical and Computer Engineering at Cornell University. Prior to joining Cornell, she was a postdoctoral fellow in Electrical Engineering and Medical Engineering at the California Institute of Technology. She received her PhD from EPFL in 2015 and her B.Sc. and M.Sc. from Sharif University of Technology. Her research interests broadly include circuit, system, and algorithm design for diagnostic and therapeutic applications. Mahsa is a recipient of the 2019 Google Faculty Research Award, the Early and Advanced Swiss National Science Foundation Postdoctoral Fellowships, and the NSF Award for Young Professionals Contributing to Smart and Connected Health. She was named a Rising Star in EECS by MIT in 2015.