ESE Seminar: ERI: Creating Inflections in the Trajectory of Semiconductors

The government is spending 1.5 billion dollars over 5 years to create a more secure, specialized and highly automated electronics industry. This talk will describe the current programs and the motivation for the initiative. 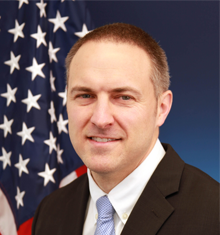 Special Assistant to the Director

Dr. William Chappell serves as special assistant to the DARPA director for electronics and 5G since April 2019. Prior to this role, he served as the director of the Microsystems Technology Office (MTO). Serving in this position since June 2014, Chappell focused the office on three key thrusts important to national security. These thrusts included ensuring unfettered use of the electromagnetic spectrum, building an alternative business model for acquiring advanced DoD electronics that feature built-in trust, and developing circuit architectures for next-generation machine learning. MTO creates the MEMS, photonic, and electronic components needed to bridge the divide between the physical world in which we live and the digital realm where our information resides. Under Chappell’s leadership, MTO developed the basic underpinnings of computation and sensing needed for an effective, information-driven military. As daily activities rely more and more on the digital realm, these technologies will also impact society as a whole.

Prior to his role as MTO director, Chappell managed DARPA programs on adaptable radio frequency (RF) systems and low-cost antenna array technologies. If these programs become fully successful, they will result in the deployment of RF components that provide the DoD with unperturbed access to the electromagnetic (EM) spectrum while enhancing society’s ability to connect by way of the same EM resource. Technologies originating from these programs also could provide the backbone for next-generation wireless systems that are not limited to a single standard or simple frequency allocations.

Before joining DARPA, Chappell served as a professor in the Electrical and Computer Engineering department of Purdue University, where he led the Integrated Design of Electromagnetically-Applied Systems (IDEAS) Laboratory. Dr. Chappell’s research focused on high-frequency components, specifically the unique integration of RF and microwave components based on electromagnetic analysis. This research ranged from advanced RF sensors, including a specific application in the analytic technique known as RF ion trap mass spectrometry, to advanced digital-at-every-element RF antenna arrays. Chappell and his research group also conducted extensive investigations into the development of adaptable RF systems, particularly focusing on tunable preselect filters.

Chappell is the recipient of numerous research and teaching awards. He served as the advisor for several best paper finalists at the International Microwave Symposium, hosted by the Institute of Electrical and Electronics Engineers (IEEE) Microwave Theory and Techniques Society. Chappell has coauthored two best papers at the GOMACTech conference and, in 2009, his paper on wearable, multiple-input and multiple-output systems was selected for the best journal paper at that year’s conference of the IEEE Vehicular Technology Society. In 2011, he received the Army Research Laboratory Director’s Coin for his work on Standoff Inverse Analysis and Manipulation of Electronic Systems, a Multi-University Research Initiative analyzing the effects of nonlinearities in high-power systems. He was selected as a collaborative investigator by the Howard Hughes Medical Institute for work on RF implantable systems and was chosen by the National Academies of Engineering to join the 2010 Frontiers of Engineering Symposium.