The nitrogen-vacancy (NV) center in diamond has been integral to the advancement of quantum technologies. It has enabled key demonstrations in quantum networks and distributed quantum computing, as well as impressive proof-of-concept devices in nanoscale, sub-cellular imaging and sensing. The NV center – a point defect in diamond with an optically addressable electron spin – boasts several advantages such as long coherence times and quantum control in ambient conditions. At the same time, the NV center still faces significant engineering challenges in the realization of scalable quantum devices. The high-refractive index of diamond in the visible spectrum results in inefficient photon collection, and the NV center’s sensitivity to charge and spin fluctuations at surfaces and interfaces necessitates deeply embedded NV centers for coherence-limited applications, which further worsens readout efficiency. The challenging optical interface has necessitated the use of high numerical-aperture objectives and free space optics, which are non-ideal components for scalable devices. On the other hand, benchtop frequency synthesizers and sequence generators typically used in laboratory experiments inhibit the packaging of NV centers for deployment outside of laboratory environments. This thesis focuses on the realization of integrated quantum devices using the NV center and targets miniaturization of the host crystal, the optical interface, and quantum control sequence generators. First, it discusses efforts and progress in realizing chemically active quantum sensors based on NV centers embedded in nanodiamonds. Following, it presents the miniaturization of collection optics through the coupling of an immersion metalens fabricated on bulk diamond to a single NV center in the crystal. Finally, it lays out performance considerations for integrated sequence generators to preserve the NV center’s coherence properties, and demonstrates quantum control at room temperature of a NV center using a CMOS control signal generator. To conclude, this thesis discusses future potential for further integrating and miniaturizing diamond-based quantum devices. 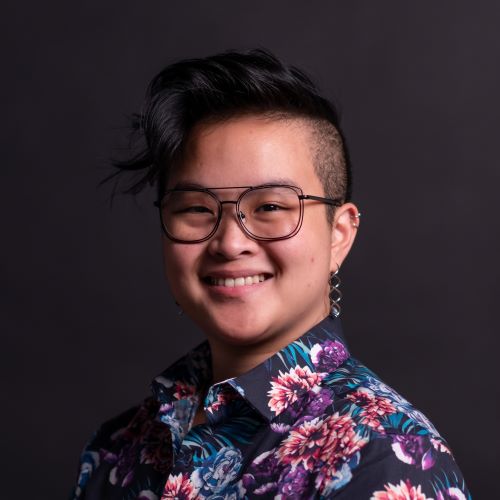 Originally from Taipei, Taiwan, Yung received their B.S.E. in Electrical Engineering from Princeton University in 2015. Their undergraduate research focused on the environmental and biomedical applications of quantum cascade lasers, and on the development of GaN as novel materials for quantum cascade emitters. Since joining the Quantum Engineering Laboratory at Penn, they have shifted towards exploring the potential of bulk and nano diamonds as platforms for integrated devices. By leveraging advances in nanophotonics design and fabrication, as well as collaborations with Prof. Aflatouni and Porf. Tsourkas’ groups at Penn, Yung’s current research focuses on realizing novel architectures for compact, diamond-based quantum devices for applications in quantum communication and sensing.